This is a photo of an average sized species of Foraminifera sieved from chalk at Ballard Down. A 0.01 mm grid has been superimposed on the image in order to enable measurements to be made.The thickness can be estimated from the quite globular chambers.Effectively the organism is actually somewhat wedge shaped;thicker at the top than the bottom.

Please click once on the image in order to enlarge it. 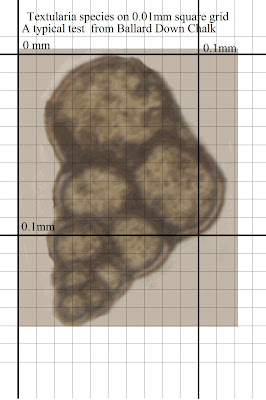 This entry is an effort to estimate the number of Foraminifera tests in a 15 cm cube of chalk from Ballard Down Dorset Uk.

I have always thought that such efforts were rather a waste of time, because there are so many variables when dealing with fossil material 95million years old. Never the less its really surprising what sort of a number one can come up with, but it is just these figures no matter how inaccurate, that engage and surprise the general public.How do we find an average when there are so many eroded tests to sample ?


I have just taken a typical surviving test mounted in a canada balsam strew that is neither too small nor too large by observation. The initial measurements were taken with a Beck eyepiece graticule graduated in parts of a mm. I shrank and expanded the image until it was exact according to my record through the microscope.
Since the chambers of the test are quite globular, I measured the radii of each chamber and calculated the volume of each, using the formula (Radius cubed times PI times 4/3) ; the formula for the volume of a single globe. The results were then added together. My selected "average" test made 0.00044107 cu mm which is pretty small .

This was then divided into the volume of the 15cm block cube which is hopefully 3,375,000 cubic mm. The result is rather nicely 7,651,846,645 which is fascinatingly enough very nearly the human population on Earth not so long ago. I think we are currently way past this figure and well over the 8 billion. This means that the calculation for the whole of Ballard Down would need a considerable amount of paper, and my old computer would certainly blow a fuse in the process.
When I consider the effect of potential inaccuracies on this figure it can more probably become greater than smaller.

I fully appreciate that numerous other and perhaps better methods can be used to arrive at a figure. I tried several alternatives but came back to the above with all its faults. BD.
Posted by Brian Darnton at 01:55 No comments: Links to this post