A species of foraminifera that does not seem to belong here? 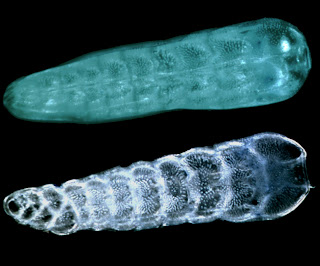 NB Please click to enlarge most images BD
These are two images of a species that is found the year round in Swanage Bay U.K.at the deposition zone (see relevant post). The first upper image is from a test dry mounted. The lip is usually slightly more reflexed and the length is on average 300 microns though larger ones occur. It is not numerous but with each collection there are one or two tests. The lower image is from a test in Canada Balsam and in dark field illumination to reveal the hidden chambers. There is a large mega primary chamber and six or so in biserial formation. I can not find this in listings of recent Forams of the British Isles in the main text books. The only similar species is in the Brady plates Plate 75 fig 22 Siphogenerina raphanus in the Robert Wynn Jones version. The illustrated species comes from the Pacific Ocean. Since it does not seem to belong to the UK fauna , there is the possibility of it being fossil but I always float the washed and dried gatherings and fossils usually have some form of heavy inclusions. Since Swanage lies between Jurassic and Cretaceous rocks the fossil possibility I suppose exists. If anyone can point me towards a more correct name I would be obliged. For a larger picture please click on the image.
brian.darnton@googlemail.com
Dated March 2009
I have had no comments to date. but will add the folllowing information
Siphogenerina raphanus
After really long term searching I am more certain that species, which consistently turns up daily in floatings from
Swanage is part of our recent foram fauna of the Dorset Coast.

It is not listed by Murray in his 1971 Atlas nor by J.R. Haynes in his 1973 work on Cardigan Bay. The identification came
from the Robert Wynn-Jones Brady Plates revival of 1994 where there is an original image from the Brady Books on Plate 75 fig 21a &b and 22. There is no mention of the British Channel but later I found it in Cushmans Atlantic 1923 at least. Plate 42 fig14. Its a very poor drawing indeed but his text is helpful.

Generic Synonyms from Cushman.
Uvigerina, several refs to Sagrina as well as 3 references to Siphogenerina.
Some features:
Up to 1mm long. ---It begins life as a biserial test but half way becomes mono.-The costae are continuous not being broken at the sutures. There is a description of the flaring lip which I would call slightly reflexed. It is certainly distinctive enough not to be confused by S dimorpha although this near species has been recorded in the British Isles and Norway in a very positive manner.
Posted by Brian Darnton at 08:29 2 comments: Links to this post