Victorian ideas on the Floatation of recent Foraminifera 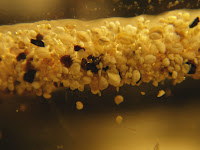 The gathered tests and sand or mud must first be washed in a 100 micron sieve with flowing water to remove salt. They must then be dried and cooled.
A whisky glass is 3/4 filled with cool tap water and the powdery material from the sieve is sprinkled onto the surface. The best foram tests will float and drift towards the edge of the glass. The silica and other debris will either sink or float in the middle of the glass. If the water level is reduced with a bulb pipette then the tests will be stranded around the edge of the glass where they can be picked up with a brush which can be washed out in a petri dish of pure water. A 1/2" wick of kitchen towel can be used to dry out the dish by micro-siphoning. The dried tests can be sieved for mounting.
Posted by Brian Darnton at 05:32 No comments: Links to this post

Empty tests *of the inshore Foraminifera

are deposited on the beaches of the U.K. on the side of the bay from which the tidal stream flows. So on the South coast it`s on the most Westerly end of the bay. In Swanage the site is around the Public Hard near the Mowlem building. The tests have a similar density to the sea coal and together they provide a useful disinctive banding as in the picture. Detail will be revealed by clicking on the image. A flat plastic card is all that is required to scrape up the whiter parts in the banding. The mixture then needs to be washed in clean tap water to remove salt in a 100 micron sieve and then dried out by heat and cooled.Victorian type floatation may then be used to yield the better tests.
* Tests are the shelly remains of the Forams.
Below is a Plate of the more common Species at Swanage Bay.
Please click on the image for a view at greatest magnification.
The two most numerous species deposited during the whole year are
Elphidium crispum and Massilina secans q.v. below
Elphidium lives mainly on the seaweed and Massilina can be found in the numerous rock pools between stable stones. 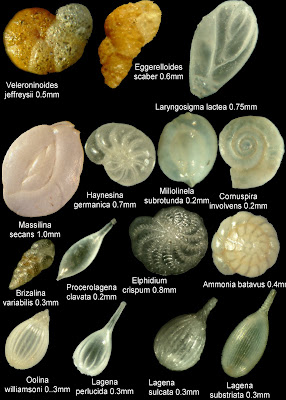 Posted by Brian Darnton at 11:57 No comments: Links to this post

Collecting in the Saltmarsh of Poole Harbour

Collecting from the mud of a saltmarsh is a little trickier. little depressions where shelly remains lie is a good place to s 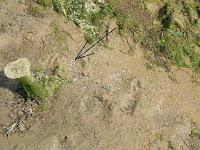 crape. Near the high tide line there may be stranded pools. These areas particularly at Arne, are quite rich in a variety of uncommon Arenaceous types QV in laterPosts. Be on the look out for very soft muds that will not support walkers and are dangerous. The base of channels are generally the hardest areas for walking.
Posted by Brian Darnton at 13:06 No comments: Links to this post