Posted by Brian Darnton at 08:28 No comments:

Posted by Brian Darnton at 15:04 No comments: 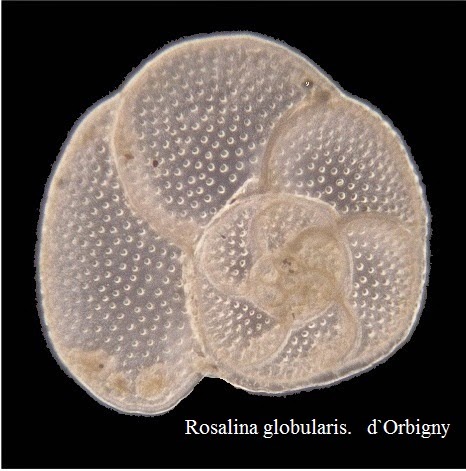 After making slides of canada balsam  in which the tests are protected by supporting the cover slips by small tabs of various diameters and thicknesses, other problems emerged; When near transparency finally emerges, it becomes evident that the tests need to be far cleaner than for dry mounting, so an extra cleaning stage needs to be introduced. The first effort  with hydrogen peroxide might be helping but long term immersion will be needed at the very least.I hope more lucid images will emerge. Please remember to click on the image to make it larger.
Posted by Brian Darnton at 14:52 No comments: 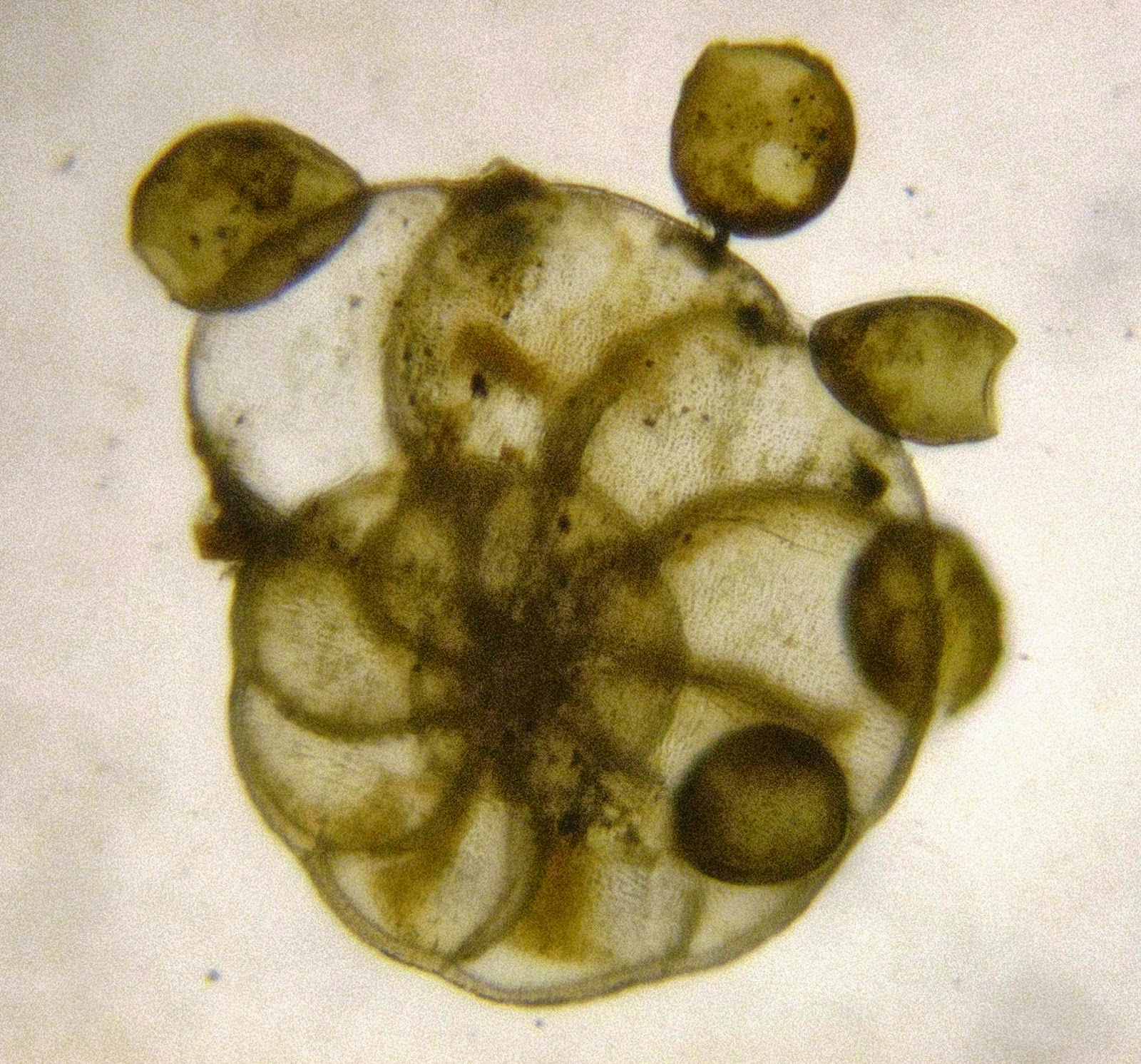 This is  an image of probably Haynesina germanica . Is was an empty test found in a deposition zone in Poole Harbour. Each Summer these tests and those of some others like Elphidium Williamsoni are found on the shores of the Harbour.

I have always assumed that the capsules were the primary chambers of  a budding adult but I cant find very good images around  the net to confirm this can anyone help . Brian Darnton.

The  foram is ot cleaned  but  mounted in Canada Balsam without pressure  .

The Foraminifera of the Swanage Shores.

These beautiful shell like creatures can only be seen with a good hand lens or better still a simple microscope. Our local species are only a fraction of a millimetre in diameter.
Foraminifera are to be found throughout the world as fossils in the sedimentary rocks of marine origin. They are an important part of the structure of many hills and mountains around the world, like Ballard Down. A small block of chalk can contain millions of tests of Foraminifera.
What is rarely appreciated is that they also flourish today as living creatures in the open sea as part of the plankton and the estuarine areas of river as at Poole.  Foraminifera are actually closely related to the Amoeba of our school text books but they grow a shell like structure called a test to protect themselves from the many hungry creatures of the seas. There are no organs and these animals belong to the Protista: the simplest and earliest of creatures to appear on Earth. The tests are made of various types of chalk (calcite). Some species seem to be almost transparent, being constructed of crystalline calcite, but others seem to be paved with porcelain like chalk but in the river mouths where there is less chalk dissolved in the water, they are protected by particles of sand or debris bonded onto a covering of a chitin-like material. These are called arenaceous species. The Foraminifera are clearly masters of adaptation as well as being climate indicators. Generally the white tests are noteasy to find because they are very small but in deposition areas they can be found en masse, usually mixed with black sea coal from industrial spillage and ship wrecks. This gives these sites a black and white banding which is easy to spot (See above Right).  In Swanage Bay an area can be discovered between the Mowlem building and the Public Hard at low tide. Washing, sieving, drying and floatation in clean, fresh water all help to  improve the sample.
As well as Swanage, Weymouth and  Fleet, there are local deposits within Poole Harbour near the Salt marshes at Arne and Redhorn Quay where they lie almost unseen, amongst the small washed up shells. The ornamental tests of these invertebrates are objects of considerable aesthetic appeal and beauty as well as having a significant scientific interest.    The two illustrations above, clearly show the difference between the Open Sea British Channel fauna of Swanage Bay and the estuarine fauna of Poole Harbour below with a proportion of gritty arenaceous types, which are very ornamental in polarised light.
Posted by Brian Darnton at 10:20 No comments: 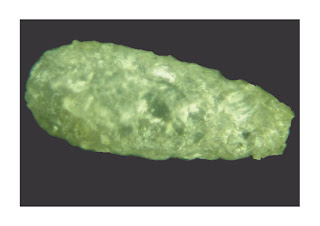 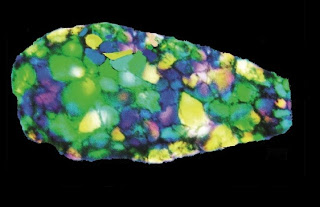 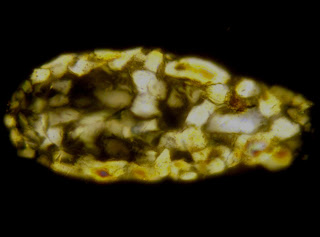 Quite often one change leads to a complete change of direction. I have been aware of the deposition of Fresh Water tests of testate amoeba in Swanage bay for several years but have rather overlooked them as an object of interest.
After several years of Dry mounting I have moved over to aspects of Mounting in Canada Balsam. and this has enabled photography using traditional methods such as Bright field, Dark field, and photography of arenaceous tests of foraminifera in polarised light.
More recently I have tried polarised light not only at full extinction of direct light but also when using various Victorian selenite plates. These effects are rather unnatural looking and much less sharp  but never the less they are quite compelling. I include my first effort as the coloured image above. The less colourful one below is a test from several years ago shown for comparison.
The diversity comes from the external protective layer of particles bonded onto the internal bag of equally protective chitinous material.They are of various thickness each distinguished with its own colour dependant upon its structure and thickness.

Posted by Brian Darnton at 01:56 No comments:

The mounting of Foraminifera in Canada Balsam without Pressure.


Foraminifera tests are more usually mounted dry to enable more natural views of these small shell like creatures to be observed.


Although More frequently Mounted dry, the mounting in Canada Balsam has surprising results. At the Turn of the centuary in 1900 Joseph Wright the clear leader of the Belfast “School” of Forams, discovered that Canada Balsam mounting improved the clarity of vision and was particulary lucid for arenaceous tests. He makes a clear statement in his account of the Foraminifera of  Rathlin Island.


QUOTE from THE IRISH NATUALIST VOL 11 in 1902  page211 from old copy
I have since examined with transmitted light specimens mounted in
Canada balsam,  and by this means. I have been enabled to see most distinctly the arrangement of the chambers throughout the entire test. I have examined In this way about 150 from dredgings taken off the Irish coast, including These Rathlin specimens, with a large number of fossil specimens from the Chalk of Co, Antrim; also the only perfect specimen, which I had of the variety fistulosa, Brady, from Raine Island Torres Straits 166 fathoms. In all Cases both the recent and fossil specimens when perfect had the early chambers arranged in a spiral manner.  Further research since 1888 hasTherefore confirmed me in my belief that this species  is truly a Spiroplectaand not a Textularia.


However those species constructed of crystalline calcite do become quite transparent when mounted in Canada balsam. The full beauty of the three dimensional spiral then becomes both evident and optically enhanced. The tests must be much cleaner than normally used for dry mounting and up to three days immersion in an open vessel of hydrogen peroxide may be required followed by washing in a fine sieve of pure water. The initial problem however, is ridding the mount of air bubbles before mounting commences. The tests may be laid as a small central strew or equally well they may be laid in a geometric or taxonomic array, depending upon the quality of material available. The tests can be secured to the glass with the Gum tragacanth more traditionally used for dry mounting and when dry, the slides can be immersed in toluene overnight in a Coplin Jar half filled with the solvent. Quite often vacuoles of air are trapped and unable to escape from the natural apertures within the test, so before mounting, the  need to be examined under the microscope. Species of the Lagena genus only have one small aperture so the slide may need to be inverted several times over two to three days. When the expulsion of air is complete, the slide can be laid on a hot plate and two drops of Canada balsam applied with a pipette and a coverslip laid. Since the tests are quite thick and brittle compared to other micro-organisms the slip must be applied without pressure and the simplest and best support is the use of three peripheral disks of around 0.5mm thickness 1.5mm diameter. The disks should be bonded to the coverslip before mounting using glass bond in sunlight followed by washing in toluene and drying with paper tissue before use. The cutting tool for these is flat nosed pliers drilled out for a piston on one side and a complimentary hole on the other These tools are actually available for the amateur Jewellery trade. Any burrs may be rubbed down on fine emery paper. Suitable brass or aluminium sheet from model shops can be purchased in various thicknesses but having been produced in the USA the measurements then tend to be imperial rather than metric. A vernier gauge is also a useful tool for this work of course. The space afforded by the three small discs also enables spontaneous bubbles to escape quite freely during the drying process. After several days of hardening the surplus balsam can be scraped away with a scalpel and the work can be ringed and protected with black shellac in alcohol and dried. Suitable labelling may then be applied. BD DEC 2012
Posted by Brian Darnton at 06:18 No comments: